The National Telecommunications Safety Panel (NTSP) as it is known today, has existed in one form or another since the mid 1960’s. The first organization was known as the “Bell System Safety Council”. Originally, the Council was an unofficial group consisting of Safety Directors representing all the Bell Operating Companies, Western Electric, and Bell Laboratories. They met sporadically and without much structure for several years, but their intent was to meet and solve safety issues facing the telephone business of the time, with their focus being the Bell System Safety Creed that stated: 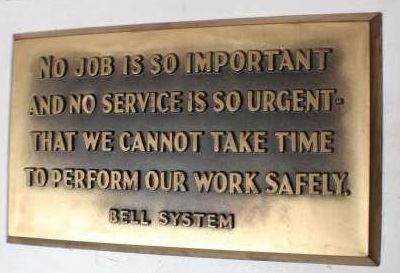 In the beginning, this “council” was strictly an AT&T corporate entity that did not have a designated leader. Over a period of several years, there were a number of individuals, usually a division level manager, who assumed the lead role, mostly for coordinating purposes. Around 1970, Jim Shumaker, a Division Manager for AT&T assumed the leadership, or “chairman” role. There are no records indicating the names of any of the council leaders prior to Mr. Shumaker.

At that time, the Council was led by the AT&T safety organization, and its members were staff safety managers from the Bell System companies:

The Council was divided into four Regions: the Northeast, Midwest, South, and West. Each region met individually on a periodic basis and once a year the entire Council would meet together. The Council discussed a large variety of safety and health issues, and recommended revisions to corporate wide safety practices or the creation of new practices as needed.

This organization and structure continued until 1974 when a new coordinator, Beryl May, was named to replace Mr. Shumaker. It was during Mr. May’s tenure as coordinator that the OSHA Telecommunications Standard was established and the Council played an integral part of this development process. An ad hoc committee was formed consisting of the Bell System Safety Council, the Communications Workers of America (CWA), the International Brotherhood of Electrical Workers (IBEW), General Telephone and Telegraph Company, and a number of rural co-op independent telephone companies. What came to be known as the OSHA Telecommunications Standard, 29 CFR 1910.268, was signed into law on March 26, 1975. Most of the provisions of this new standard were based on existing Bell System Practices (BSP’s) because of their thoroughness and proven effectiveness in eliminating hazards and preventing accidents.

Ross Beech became the next Coordinator in 1977, followed by Jim Reese in 1980 who chaired the group until the divestiture of the Bell System on January 1, 1984. The divestiture changed the face and the future of the telephone business forever, and the Bell System Safety Council was no exception. Divestiture created a new corporation that became known as BellCore, an acronym for Bell Communications Research. It also created seven regional holding companies from the previous Bell System companies. The seven regional companies were: NYNEX, Bell Atlantic, Bell South, Ameritech, Southwestern Bell, U.S. West, and Pacific Telesis. BellCore was wholly owned by the seven regional companies and was basically the liaison for the regions.

As part of the new governing structure of BellCore, all facets of the business were coordinated by forming either a “committee” or a “panel.” Health issues were directed by a committee known as the Occupational Health Committee. Safety aspects were directed by a panel known simply as the Safety Panel. At this time, the name of the safety group was officially changed from the Council to the Panel, and the Coordinator title was changed to Chairman.

The Occupational Health Committee was composed of the medical directors from some of the seven regional companies and the medical director and safety director from BellCore. The committee was co-chaired by Dr. Gil Collins from NYNEX and Mr. John Ludwig, a safety director from NYNEX. The Health Committee had a rather short tenure of about one year after which the health issues were addressed by the Safety Panel. The Safety Panel consisted of a safety director from each of the seven regional companies and one from BellCore. The Panel’s first Chairman was Jim Sagester from Ohio Bell representing Ameritech.

On January 1, 1986, BellCore funding stopped, and the Safety Panel formed by BellCore was officially disbanded. The members of the Safety Panel, however, continued to hold what might be called “reorganization” meetings, some against the advice of their legal departments. The main purpose of these meetings was to determine if coordinating safety and health issues and establishing consistent safety practices throughout the industry fell into the same competitive arena as the selling of telecommunications services. It was unanimously agreed that these issues should not be considered competitive and consistency throughout the industry should be continued in the field of safety. The question was how to do that without going against the governmental decree of divestiture. The answer was to continue the cooperation and coordination between the former Bell System companies, and also open a dialog of cooperation with the entire telecommunications industry. After much deliberation with executives and lawyers in each company, it was decided to form a national forum or panel. Another meeting was scheduled with all current Panel members and invitations were sent to General Telephone, United Telephone and MCI to attend this landmark meeting. Jim Sagester continued as Chairman, a new agenda was set, and meeting dates were changed to quarterly in order to keep up with an ever-changing industry. Thus was born, “The Safety Panel” as it was known for the next several years.

By the mid 1980’s, the success of the Panel had grown and it was decided that a larger forum was needed to include more safety professionals, but one that would not make the Panel itself unmanageably large. To address this need, the Panel decided to sponsor an annual Telecommunications Safety Conference that would be open to any safety professional from any telephone company nationwide. The agendas for the conferences were determined by the Panel, and speakers included nationally known safety experts from industry, academia, and government. In addition, member companies were given the opportunity to present success stories or details of a safety program that was working for them in their company.

In the late 1980’s, the Panel decided to expand the conference even more and it became the International Telecommunications Safety Conference (ITSC), with delegates attending from Canada, the United Kingdom, and Australia. In later years, delegates have attended representing Belgium, Denmark, Mexico, and Korea. More recently, representatives from cable television companies and the wireless industry have also been attending and contributing to the ITSC.

Around 1998, the Panel members decided that the name “The Safety Panel” did not quite express the posture and agenda of what the organization was striving to accomplish within the industry. In addition, delegates that attended the ITSC were asking for a way to get pertinent and updated information from the Panel more frequently than just at the annual conference. The members decided an update was in order and created a new image for the organization with a logo, a mission statement, an advocacy policy, and a web site for communicating to the industry. The Panel also created a new name, the “National Telecommunications Safety Panel”, or NTSP.

Throughout its existence, the goals of the NTSP have always been to encourage consistent and coordinated safety policies throughout the telecommunications industry, and to present a unified voice for the industry in response to government regulatory actions. In pursuit of these goals over the years, here are just a few of the issues the NTSP has been actively involved in (see the Panel Activities section of this site for the most recent information):

Confined Space – The NTSP presented industry-wide safety practices and data that convinced OSHA to exempt the telecommunications industry from the confined space standard. This exemption has saved the industry countless dollars over the years without comprising safety.

Personal Protective Equipment - The Panel submitted comments to OSHA in 1999 on behalf of the industry during the development of the PPE standard.

Fall Protection – The NTSP submitted comments to OSHA in 2000 concerning revisions to the fall protection standard. The Panel has also worked to develop best practices for fall protection in the industry.

Hours of Service – The Panel has submitted comments to DOT regarding revisions to their hours of service rules for commercial vehicle drivers. The comments clearly pointed out the differences between telecommunications industry drivers and the over-the-road drivers for which the rules are intended.

The NTSP continues to monitor these, and other issues, that impact our industry and the safety of our employees. It is the sincere hope of numerous people that have been associated with this organization over the many years of its existence, that its impact will continue to be seen throughout the telecommunications industry, and its history will continue to be written.

The NTSP sincerely thanks Chuck Hill and Jim Degen for compiling this history.

* September 11, 2001 was the first day of the 2001 International Telecommunications Safety Conference (ITSC) held in Providence, Rhode Island. The session was officially opened and the ceremonial gavel had just been passed from the outgoing Chairman, Chuck Hill, to the incoming Chairman, Kent Kunce. Moments later, one of the people at the conference registration desk in the lobby rushed into the room with an urgent message. Kent Kunce had been Chairman of the NTSP for only a matter of minutes when one of his first official acts was to announce to all in attendance that the United States had just been attacked by terrorists in New York City. There was immediate chaos, especially for those with operations in New York City. Due to the circumstances, the conference was concluded for the day.

The next day, many delegates attending the conference signed up for blood donations being arranged by local Providence officials. The conference was continued, but concluded earlier than planned and ended with a prayer for peace. Because all air travel was canceled by the government, people began to scramble for transportation home. People who did not even know each other before the conference, teamed up in a limited number of vehicles to travel to all parts of the country together. It was truly a time to come together and a conference that will never be forgotten. And for those who were there, they will always remember where they were on September 11, 2001.

HISTORY OF THE BELL SYSTEM SAFETY CREED
The Bell System Safety Creed originated in the Central Area of the Bell of Pennsylvania Company. It was first stated in 1937 in a speech made by Mr. W.T. Wooters, then the General Plant Manager, at a district safety meeting in Harrisburg, PA. The phrase was so well accepted and remembered that it was incorporated as part of the state safety program for the Bell of Pennsylvania.A year later in 1938, the Operations and Engineering Department of AT&T, while working on a documentary motion picture, heard of the phrase and decided to include it in the motion picture entitled, “How It Happened”, that was presented to all employees system-wide in 1939. In this picture, the Creed was displayed in plaque form for the very first time.

Then in 1952 while accepting the Award of Honor from the National Safety Council, Mr. Cleo Craig, President of AT&T, designated the Creed as official company policy for safety hroughout the Bell System.